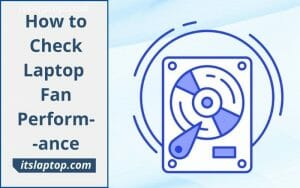 There are many factors that affect the performance of the laptop fan. One of the most important factors is the laptop’s operating temperature.

The hotter it gets, the faster it runs and that can cause some serious damage to your device.

The best way to check if your fan is working properly is by using a free software called CPUID Hardware Monitor.

It will display information about your CPU, including its speed and temperature. You can also use it to check if your fans are working properly or not.

Let’s discuss the methods to check the performance of laptop fan.

How Does A CPU Cooling Fan Work?

Each second, millions of calculations are performed by the CPU. The power generated by a computer causes heat, however, which can damage the electronics.

To dissipate that heat, a CPU cooling fan is necessary, and keeping your computers’ cooling systems maintained can extend their life and reduce the possibility of damage to the business’s most important systems.

Due to their high temperatures, CPU chips cannot be cooled or handled by simply blowing air over them.

Heat sinks are usually made of aluminum or other heat-conducting metal.

There are many fins with air channels in the heat sink’s upper surface, and the bottom of the heat sink is flat to maximize contact with the CPU.

The fan can dissipate greater amounts of heat as it blows air through these channels, and this drastically increases the surface area available for convective cooling.

A computer’s cooling mechanism is rooted in the thermodynamic principle of convection. Hot objects transfer some of their heat to air molecules close to their faces, cooling them a little as a result. The molecules will float away since air is moving, so they are replaced by cooler air that can absorb even more heat.

With a fan, the air is constantly moving, helping to eliminate heat from the object and significantly speeding up the cooling process.

CPU fans have variable speed controls in modern computers. A motherboard sensor detects changes in CPU temperature while the computer is running, and directs the fan speed to speed up or slow down in response to activity and load.

The fan may stop spinning during idle periods, only to spin up during intensive calculations, depending on the manufacturer of your CPU and fan.

Whenever you’re engaging in graphics-intensive programs, like designing tools or video-rendering software, you should hear your fan spinning up.

If your computer produces a high volume of fan noise when you’re performing calculator functions such as spreadsheet calculations and word processing, a problem may be present.

Here are some steps you can follow to keep your CPU cooling fan running as efficiently as possible.

Keeping your fan and heat sink clean will prevent the buildup of dust that can cause damage to the fan motor and bearings and deter the flow of air. Don’t dust your computer.

If it is turned on, and ensure the intake and vents are clear and unobstructed as well as avoid any cable tangles inside the case which could obstruct airflow. Also, make sure your computer case remains cool while you dust it.

By properly maintaining your CPU cooling system you could be able to extend the life of your company’s valuable hardware and avoid the necessity for replacing burned-out systems early.

How To Check Laptop Fan Performance

Now we will discuss in detail about How to Check Laptop Fan Performance, let’s start!

Laptops’ CPU fans have an important job to do. They remove heat from processors, keeping your Laptops cool, and preventing overheating.

When components inside a Laptop overheat, their performance can be affected as well as the Laptop’s components themselves could potentially be impaired.

In addition to a CPU fan. Laptops also need a fan for the power supply and video card, along with a fan in the case itself to cool things down.

The CPU fan may not show signs of under performance until it’s been malfunctioning for a while.

You can check the speed of your fan by opening the case, accessing Bios, or accessing a third-party tool that helps you visualize and manage the fan’s performance.

Taking a quick look at the Laptop fan speed is one of the easiest ways to check the Laptop Fan speed if you can easily open the Laptop case.

Find the model of your CPU in the user manual that came with your Laptop. You should also be able to find the layout online.

On most laptops, there is a small fan near the CPU, which is usually near the edge of the device.

The laptop fan can discharge air directly from that location without needing to pass over other components first.

#3. Check Your BIOS For Fan Settings

It may be easier to use the software to check the fan speed of your Laptop instead of taking your laptop apart.

You can find the basic information you need about your Laptop’s performance from its BIOS.

You’ll find different settings in BIOS depending on the Laptop you’re using, but you’ll be able to take at least a look to make certain it works.

When you restart your Laptop, you have to press the appropriate button to go to the fan speed controller in BIOS.

The “Delete” key usually does it, or you can press F12. Look in the Hardware Settings, which is typically under a more general “Settings” menu. 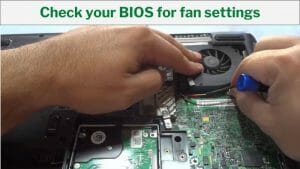 And you will see the Fan settings. Your Laptop can have its target temperature controlled by this setting. If your Laptop has a high temperature, you can lower it. The question of how to check the performance of a laptop fan was answered.

#4. Use Software To Test Your Fan

To monitor and control your fan speed, you may find that a third-party fan speed controller is a better option.

There are likely software programs specific to your PC’s manufacturer’s CPU. Please check if the manufacturer of your PC’s CPU makes cooling software.

There are generic third-party apps available for managing and checking PC fan speed. If you don’t want to search for one for your particular type of fan.

You can get a good app like SpeedFan and MSI Afterburner with a Mac. Also, Mac Fan Control is the best for Mac users.

#5. How To Fix Fan Speed Issues

The first step is diagnosing issues. You’ll also need to solve any issues you may find.

The first thing you should do after finding out your fan speed controller doesn’t work as it should is clean your Laptop.

Fan efficiency can be diminished due to dust build-up. A quick shot of canned air can be the solution. 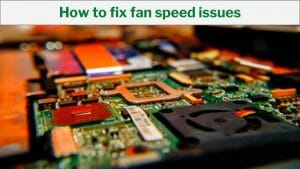 You may just need to install a new fan in certain instances.

If you’ve adjusted the settings and cleaned out your Laptop but are still having problems. Then replacing your fan could be the deciding factor.

Did I Miss Anything?

Or may I miss any new method to check fan performance that you know? 👀

Either way, let me know by leaving a comment below right now.