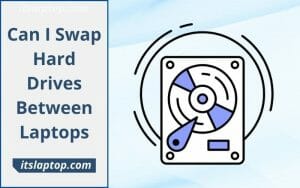 Worried about how to Swap Hard Drives Between Laptops? Don’t worry! I am here to provide you with the solution.

Here I’ll discuss in detail about how you can easily swap hard drives between two laptops. I will also tell you how you can remove or swap the hard drive from the laptop easily.

Let’s talk about How you can easily swap Hard Drives!

What Is A Hard Drive?

Hard drive or Hard disk drive is basically an abbreviation of HD or HDD. Now let me remembered you that hardware means anything that can be touched.

Hardware is basically a mechanical device in the computer. These two hard drives are types of hardware because we can touch these drives. The hard drive is a non-volatile that is used to store data.

Hard Drive is manually installed in the internal area of the computer and attach with the disk controller to the motherboard. I hope you knew a little bit about the Hard Drive or HDD. If you know HDD and SDD then it is awesome. Now, we talk can I swap Hard Drives between Laptops

Can I Swap Hard Drives Between Laptops?

If you know about the Hard drive then you can swap it easily. But, one problem that your both laptop should have properties of the hard drive. You have to take great care while swapping the hard drive from one laptop.

They are should be the same size and you have to connect via the same interface then it could be possible for working.

The drivers are also installed or pinpoint on the laptop or on that particular hard drive.

Usually, the operating system has its own default drivers and allows that detect your new hard drive and provide you the facility of boot up.

If you still want to swap your hard drives between two laptops then it’s your own risk.

If both laptops have the same functionalities then you can swap hard drives between two laptops.

We will discuss a unique method how to swap hard drives between two laptops. Let’s discuss it step by step!

First of all, make sure your laptops are not connected to the “power source” and your both should not be turned on.

Now, Open the screws of laptops carefully through “Screw Diver”.

After opening all “screws” of your both laptops then keep them in a safe position.

After that, you will see “4 screws” on the hard drive metal shell on both laptops. you have to open those four screws with the help of screw divers.

Now, you can swap hard drives between two laptops.

Yes, sure both laptops will work with swap drives with no problems. But I think it’s the best and good way to re-install the Operating System again because both the laptops are from a different manufacturer, they may use different CPU hardware and different Ram sizes and SSD storage. Both laptops may be a bit slow or may not boot after exchanging drives.

It is just better to do a fresh installation of the Operating System. It is a wise step to re-install the operating system.

You can get better performance from both laptops.

You may however be able to swap that, but you would need some sort of 1.8″ to 2.5″ adapter bracket or a 1.8″ to DVD drive adapter. In this case, you have to boot your laptop and may install a new operating system. Now it depends upon you either you swap the Hard drives between two laptops or not.

It’s a better way you can go to the laptop manufacturer to swap the hard drives. It reduces the chance of fear of swapping Hard drives.